You are here: Home › MOOC › Zero pedagogy: A hyperbolic case for curation and creation over education in the age of the MOOC (#moocmooc)

The crazy argument for Zero pedagogy

Pedagogy does not matter. It has always been a discipline aimed at making people learn something they don’t particularly want to learn.

If we can truly provide open access to all the resources necessary for learning, then it won’t matter what order, format, etc. they are in. People with sufficient motivation have always been able to learn it.

True, there are other barriers to access than cost or availability in space. Some types of materials can be inaccessible to people with certain modal disabilities (modes being sight, hearing, cognitive decoding difficulties, etc.). The other types of barriers can be barriers of language or prior learning.

But we can harness the power of networked communities to help remove those types of barrier. Masses of people are learning to type. Let them transcribe YouTube videos. Others are learning foreign languages, let them translate texts. Having a voice coaching lesson? Record some blogs into audio! And so on.

The only pedagogical move necessary for a MOOC is the removal of any unified pedagogy. The rest of the effort should be focused on open access, open communities and open content.

This may not square well with traditional curricula and conceptions of education. But patterns resembling traditional schooling will emerge. But if they emerge with less central control, consistency and, please, please, less excellence, we will all be better for it.

Some background of pedagogical skepticism

A few weeks ago Mills Kelly of edwired.org was prompted by my comment to look for an X-prize style award “Recognizing excellence in transforming learning“. The original comment was:

“I’ve been searching in vain for an educational reform aimed at content or pedagogy that made a transformation of the education system in accordance with its goals. And I could not find one.”

My response to his call was skeptical:

The problem is that it’s not difficult to find examples of “teaching excellence” (as appalling a cliche as it is). From what I understand of your “Lying about history” course, Mills, I’m sure you’d be a candidate.

There are also a whole lot of approaches that have produced amazing learning at all levels. Montessori, Critical education, Problem-based learning, Project-based learning or even Synthetic phonics. When led by dedicated and enthusiastic educators, all of these can succeed. And there’s plenty of evidence of this. What I’m asking about, though, is an example of one of these turned into a system-wide reform, that at the very least, transformed outcomes and, at best, society in a way they set out.

But the reason there aren’t any, I have begun to suspect, is because they are impossible. System-wide reforms are subject to different processes and factors than pilots or individual experiments. As I said, the only reforms that can succeed in this way are those aimed at funding, governance or access (which is the reason I’m so bullish on MOOCs).

The problem with an X Prize is that it only works with problems that can be measured on a uni-dimensional scale. An electric vehicle will travel X miles, a shuttle with X per cent of private funding will deliver a payload. But any putative educational reform that would be worth such a prize would 1. not be measurable along a single scale, 2. take too long to see the results, and 3. could only be done one at a time in any one country (and if run in several countries at once would not be transferable).

Of course, you could have an X Prize system for individual achievements but never with the assumption that the winning approach would be implemented system wide. But it seems to me what you’re talking about is some sort of a (micro) grant system for teaching parallel to the one for research. These exist in different forms already but it would be interesting to see how it would work if they became more of a norm rather than the exception.

When I put this together with my heretical rejection of pedagogy above, I come to the… 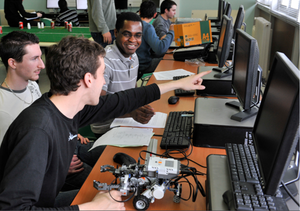 Despite its etymology, pedagogy [leading of boys], cannot be given. It must be sought. The learner is her own pedagogue. There may be more or less clearly given explanations, more or less productive sequences of learning, more or less accessible learning materials. But none have made, will make or can make a difference to the resistant learner.

If pedagogy could really make a difference to mass learning, it would have already done so. Advances in mass literacy, numeracy and other skill increases seem to always happen prior to putative advances in pedagogy but following the expansion of access.

A self-directed, self-motivated learner, will take any resources (no matter how pedagogically naive or badly instructionally designed – Khan Academy, iTunesU lectures, iPad ebooks, labs, conventional classes or TED videos) and use them to learn. As the learner becomes more aware of their own learning (gaining metacognitive skills), they will look for resources that suit their learning better. And, in many cases, will create such resources. That’s why we need to encourage a culture of the remix. Or in starker terms: Curation and creation over education.

Diversity and equality are fundamentally incomensurable. Most of the time we keep them in a precarious equilibrium but at times of flux, this becomes unbalenced. So perhaps the next step in a MOOC pedagogy is a quest for equality in diversity. And, I would not be opposed to asking the likes of Dewey and Freire for inspiration here because standardized testing or traditional credentials are not it!

This post is loosely following up on the following:

Discuss, go ahead, you know you want to!